Photo of Kenneth Battersby has been found

Due to our ongoing research we managed to find a photo of Kenneth Battersby. Read more about his story here:

On the English side they were convinced that the Germans would not let them alone. The Germans had dug in at the east embankment, only 35 meters further.

At around 10.00 hours of this 6th of December a first German counterattack on the houses at the locks took place, which failed.

From midday on the German artillery had found the right way to hit the houses at the locks. Now all the English soldiers had to withdraw into the cellars. When the evening of December 6 fell, the Germans, using the darkness, began to infiltrate the British lines. A few Germans even succeeded to reach Pannenhof, where they were repelled. The houses at the locks were shot at with Panzerfäuste, which caused big holes in the walls. Just after midnight 20 Brits of B Coy /4e RWF were sent as reinforcements to the houses at the locks.

One of them was Jim Sweeney who also belonged to B coy: “Together with 20 others I had to take a new transmitting device to houses at the locks. The trip there was heavy. Because of the muddy terrain, the mines and the falling grenades around us, it took quite a while before we got to the houses. When we arrived there, it looked like hell. There was constant shooting and several times the Germans tried to shoot the houses on fire.”

When dawn broke in the morning a group of German paratroopers succeeded in entering one of three houses and take 4 Brits as prisoners of war. One of the Brits was heavily wounded. Immediately they were taken to the German major Zander in Linne for interrogation. During the night and in the early morning of December 6 to 7, five more attempts were made by the Germans to retrieve the houses at the locks, without success. The houses stayed in British hands, but at the cost of three British dead, killed during the fights in the night, one of which being Kenneth Battersby. After the fights four Brits were missing and had been made prisoners of war.

Read more about Kenneth in our database. 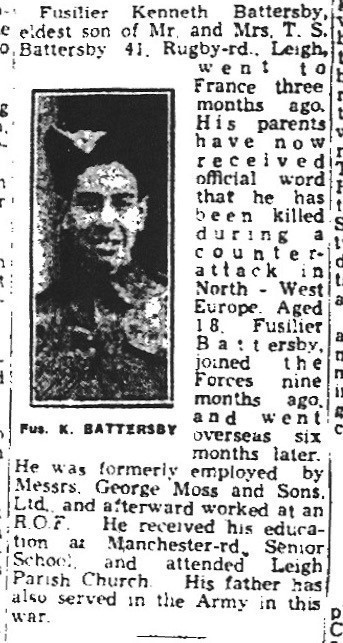