On Wednesday, November 17, the St. Ursula Scholengemeenschap in Heythuysen received a special visit from various former fighters, people from the resistance and victims of the Holocaust. Since these former fighters came from both the Commonwealth countries and Germany, true forbearance was put into practice. The group of veterans this year consisted of Dutch, Belgian, British, Canadian, Czech and German former soldiers who were active in the Leudal during the Second World War, supplemented by two so-called "new generation" veterans, a few people from the resistance and two Jewish victims of the Holocaust. During mutual, informal conversations, the students could talk to the guests and ask questions. These conversations were very casual and very personal and stirred the students enormously, sometimes so much that they had to dry each other's tears.

This year there were also a number of classroom conversations, including the young veterans Mike van de Vondervoort (various missions in Iraq, Afghanistan and Uruzgan, bearer of the Cross of Merit) and Philippe Wagemans (two Uruzgan missions), who also visited these years a few years ago. had been in school. Resistance fighter Joke Folmer (bearer of, among others, the British George Medal and the American Medal of Freedom with Gold palm) got the students silent with her impressive story and the Belgian former political prisoner Evrard Voorpijls managed to make the students shed tears when he spoke about the five concentration camps that he had survived.

For the first time this year veterans of the Royal Air Force were present, namely the Briton Ron Brown, who as a flight engineer had survived no fewer than 64 missions at Bomber Command and the Czech veterans; Colonel Jaroslav Hofrichter, member of a 680 bomber crew! operating hours and Colonel Emil Bocek, one of the last three Czech Spitfire pilots. The visit was linked to the annual International Remembrance at the Monument of Forbearance in Haelen on Thursday, November 18. The students of SG Ursula were also involved in this commemoration and many brought presents for the veterans with whom they had spoken the day before.

The highlight of the commemoration this year was the so-called flower arrangement of tolerance in memory of the 687 soldiers from 11 countries who fell in the Leudal during the Second World War, laid by veterans from no less than six countries, with which these former enemies set an example to everyone and showed that tolerance is the only way to a joint future. 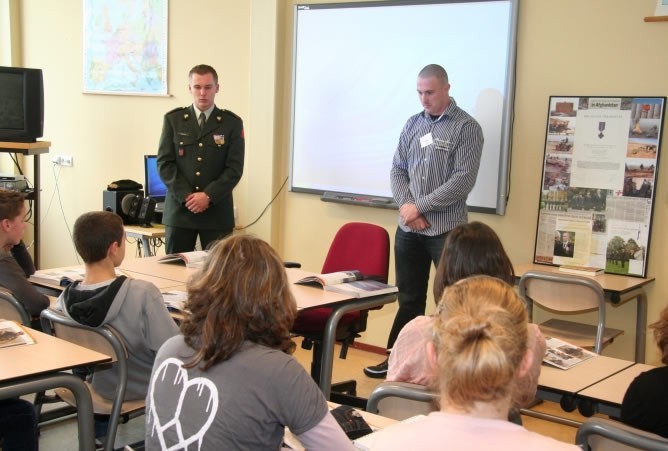